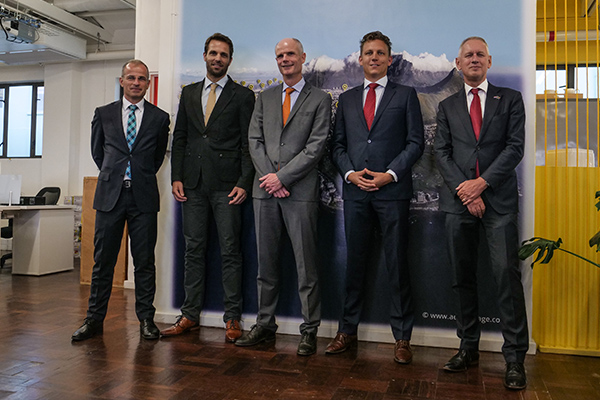 Pargo HQ recently had the honour of opening its doors to the Dutch Minister of Foreign Affairs Stef Blok, Consul General Sebastiaan Messerschmidt and Dutch Ambassador Han Peters during their one-day stay in the Mother City.

Stef Blok and his delegation were in South Africa for a short state visit. After spending their first day in Pretoria with the Minister’s counterpart, Naledi Pandor, the South African Minister of Foreign Affairs, the Dutch delegation headed to sunny Cape Town to visit a few select companies.

The delegation was curious to meet the team behind Pargo, which is playing an important role in stimulating the South African economy by building business-enabling infrastructure.

Mingling with the Pargo team, the Minister was captivated by the history of the business, the challenges the company has overcome and the company’s growth trajectory. With an agenda focused on participative conversation, the Pargo team engaged with the delegation for an hour and a half (despite the fact that appointment was set for only 45 minutes).

During their conversation, founders Lars Veul and Derk Hoekert explained the vision behind Pargo; to open up access to anybody in Africa by offering a last-mile Click and Collect delivery service to remote and inaccessible areas, including rural areas and informal settlements.

The Pargo team described how they had resolved some of the major challenges faced in the early stages of the company’s inception. Educating the public about a brand-new service, building relationships with business partners and earning a stellar reputation in the eyes of online shoppers naturally gave the founding team challenges to overcome.

Showing how these had been resolved, Derk and Lars spoke about how Pargo is now partnered with well-known corporates such as The Foschini Group, Cape Union Mart and Clicks and described how the company is able to offer a seamless customer experience throughout their network of thousands of Pick-up Points and Instant Click and Collect service.

Lars Veul commented on the visit, saying: “It’s an honour to be recognised as a company that is providing a viable solution to a big problem in Africa. 75% of the population has limited access to goods due to insufficient last-mile delivery services caused by inconclusive addresses, poor infrastructure and a failing postal service. It’s exciting to be able to tackle these problems and play an important role in helping businesses connect to their customers.”